Group 33 Lunch at the Farm

Saturday last I was delighted to be in the company of 13 members of my Breast Cancer Support Group. Throughout the past 18 months I have missed many of the monthly luncheons due to pain and suffering, including my inability to drive as a result of fatigue from the medications. The women decided it would be worthwhile to hold a 'special' luncheon at the farm.

The girls arranged to meet and travel together. Several of the women live in the Newcastle/Lake Macquarie region while others reside around Maitland, which is closer to the farm. The first 2 cars arrived. I immediately began feeling slightly nervous; I was expecting around 9 and I had 8. They began pulling food out in Esky Cooler boxes. It had all been planned by Pam [Social Secretary] that Haydn would do meats on the Weber Q barbeque and the group were given responsibility for drinks, breads, salads and deserts. Looked like we were feeding an amy. But where would we sit? Would the weather hold to allow us to sit outdoors?

It was planned that it would be a leisure day for me; their way of acknowledging the stresses of the past 18 months.

A few minutes later and I was surrounded by 13 lovely ladies - along with Haydn and myself. I felt slightly distressed when it became painfully obvious that I was no longer able to press the button to activate the shutter on the camera. Fortunately Margaret was a willing party and took lots of lovely pics, although I was too distracted by the great company, food and laughter to remember to get Haydn to take a snap of the group as a whole.

We really did have a delightful day! Plans were put in place for a winter luncheon which would enable us to sit around the combustion fire, burning wood felled on the farm, and split by Haydn for exercise and fitness. Maybe even a walk up the mountain could be arranged .

The travel time home did not appear to phase them as it was 4.45pm before anyone made a move to leave. I was presented with the most magnificent bunch of liliums that I had ever been given although I really felt that it should have been the other way around.

It was a fantastic day and I did not lift a finger. I came into the kitchen to find the dishes done and leftovers in the refrigerator which meant no cooking for at least a couple of meals. 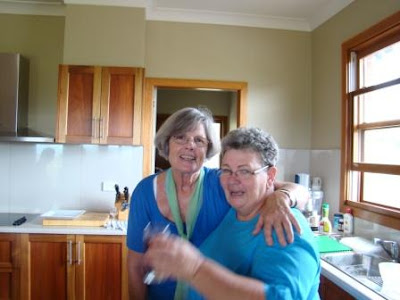 Cheryl on the left with Chris 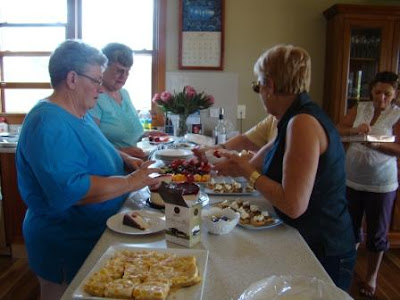 Lunch is being served 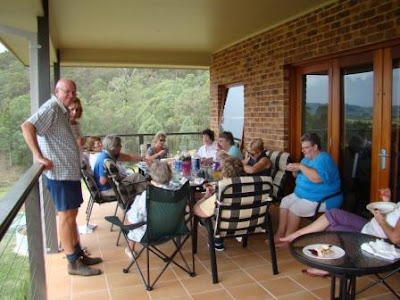 Haydn entertains the girls and talks about life on the farm 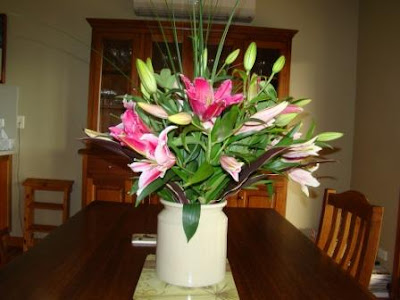 WOW! In appreciation. The buds were not yet open so I am enjoying them now....

It would seem a glitch in a Windows Update was the reason my computer was in Lillo's workshop for the past week. It was great to have it back so why then did I find myself in tears? The deterioration in motor skills, and build up of fluid in my hand and arm saw my typing skills go out the door. For the first time in my life I have become a one finger typist. This is my reason for not responding to emails or commenting on Posts. It is my intention to find some way of overcoming this, so if you have any ideas I would love to hear your suggestions.


Dr Janine Lombard, my regular Medical Oncologist, is currently on maternity leave. I found myself sitting in front of Dr Tony Bonaventura, making every effort to get some understanding of his personality, which is often more important to me than actual ability. He appeared to be non-communicative, which presented some challenges.

I was told that the recurrence of my cancer in the brachial plexus is most unusual (unfortunately for me.) To me this means that the medical profession appear to know very little about my condition, or how to treat the symptoms. Dr Bonaventura suggested that I undertake hormone treatment, using Femara (Letrozole 2.5mg) for 6 weeks. I will then have another PET Scan and, who knows where to from there! Chemotherapy has been mentioned.

Haydn has made it very clear that he is with me for as long as it takes and my children are very grateful that I am in such capable hands. Who would have thought that it would be my ex-husband acting as my carer? Haydn is very reassuring and reminds me, as necessary, that he will do all he can to facilitate my healing.

Yesterday we visited Dr John Prickett at Hunter Pain Clinic. If I have anything to be grateful for, as far as my medical condition goes, it is that the war in Afghanistan means that more is being learnt about the pain associated with the brachial plexus. Dr Prickett suggested that it is the worst pain to suffer from, and one of the worst pains to treat. There is no drug known that completely eases the pain. He did say that most patients he sees are out of control; he sees no sign of that with me. He also said that patients usually suffer fom depression. When the depression is treated the pain eases. After discussion with Haydn, he said that he did not feel that was relevant. Allelulia! Thanks family and friends. You play a huge part in keeping me sane.

I was given a prescription for Sodium Valproate, an anti-epileptic drug, and also Norspan patches to relieve the pain and replace the large doses of Oxycontin which come with dreadful side effects . One of these is the dry mouth leading to tooth decay. It seems that these teeth of mine, which have cost huge sums of money over the years, may slowly, but surely, disappear.

Before having the prescriptions filled I will discuss the treatment with Palliative Care and my new GP, Dr Milton Sales. It is easy to become confused with too many treating practitioners involved. I have learned the hard way the absolute necessity of having Palliative Care on call.

Once again I was told that my case is quit unique and there is very little known about the condition, or treatment.

Dr Pricketts final words were that I should 'revel in my uniqueness' whatever that means...