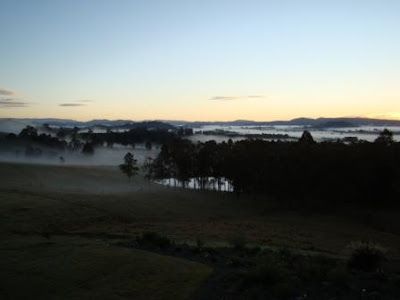 It has been too long! At last I feel well enough to begin writing once again.

I use the view from the farm house to meditate and reflect. The days are beautiful! We have had very little rain over the past months and yet the early morning mist still settles in the valleys. I love it!

I made the decision to do a quick Post after checking my Comments for the first time in months. Debby noted that she was to undergo a PET Scan. I decided to check her Blog, which resulted in this attempt.

The return of my cancer in the same breast has had ramifications leaving me to reflect on the loss in my life.

I was 12 the year my Father was taken from me in an horrific accident. He was travelling to work and the vehicle in which he was a passenger was hit by a train at a level crossing.

In 1965, just 5 years after my father's passing, I gave birth to a baby girl. As an unmarried mother, I had no way of supporting myself, let alone my beautiful baby girl. My daughter Carla was given up for adoption.

I suspect that these experiences strengthened me. Fortunately I had no idea of what lay ahead of me.

My life remained relatively normal until 1994 when my much loved husband of 27 years lost his long fought battle with cancer.

I felt very much that the loss of my breast was another blow. At no time had I sought help to deal with my emotions, although I did find Prayer Counselling very useful.

The early months of 2006 were spent travelling to and from Dubbo; my Mother's health was failing. Mum died in October 2006.

There was no time to mourn her passing as my beloved youngest son Jeremy Jon was tragically killed in an horrific motor vehicle accident just weeks later. No mother ever expects to lose a child in her lifetime. A piece of me died with Jezz; my bleeding heart attempting to live with the loss.

The confirmation that my breast cancer had returned in April of this year meant my life was thrown into turmoil. I was taking Oxycontin for pain relief. It was actually a relief in some ways to find that there was a reason for the unbearable pain that had become my constant companion.

I was told the cancer is inoperable and incurable. Radiation the only form of treatment that would give me another chance at life.

The treatments presented no problems, although the radiation burns were very painful. It appears to have worked well on reducing the pain as I have been able to reduce my pain medication considerably.

Unfortunately, I completely lost the use of my right arm and hand. This was initially very confronting as it is my dominant hand. As I battle daily with the exercises to improve strength and fine motor skills, I have learned to accept that this is yet another loss that I must learn to live with.

There have been many tears shed as well as frustration at every turn. I have lost the desire to eat and the fatigue has almost beaten me on occasions. I have been unable to drive, due to the fatigue, and I feel that I have been imprisoned at the farm. Each time I leave the farm it is with Haydn behind the wheel and me in the passenger seat. I have missed my social outings and contact with girlfriends. Actually, it is fair to say I have missed my contact with friends, as this has meant that my blogging friends were also put on hold.

As you can see, there are times that I have felt like I have given up so much. Guess that is what has lead me to write about the loss in my life; I know your comments will educate and inspire me.

It feels good to be back.