I recently purchased this tulip like lotus plant, aptly named Angel Wings.
It has produced its first flower, reminding me that Jeremy is with me in spirit always. 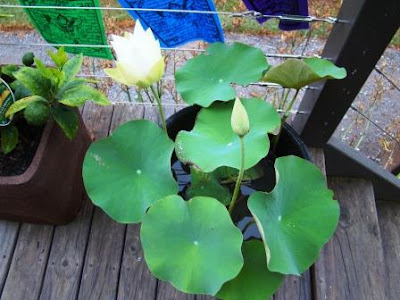 The morning began badly. Although the topic of this discussion could be considered a little sensitive, I feel it is imperitive to record the details.

One of the side effects of Oxycontin is a tendency to constipation. It seems prudent to check for signs and symptoms after going to the toilet. This morning I was shocked to see, what appeared to be, a 40mg Oxycontin tablet in the toilet bowl.

I decided to discuss the matter with the Palliative Care Duty Nurse. Shann listened to my story and suggested that Dr Newton [Palliative Care Doctor] would be the one to ask on her return from rounds. I was told to do nothing and wait for her to get back to me.

What a surprise to find not 1, but 4 more tablets in the toilet bowl at lunch time. Panic!

Another phone call to Shann and then wait. Not long before I received a message asking if I would have any objection to using patches for pain relief. I said anything is preferable to this unbearable pain. I had no idea how long it had been since the Oxycontin was fully absorbed.

It was then I knew that I was being guided. I began to think about the series of events that had led to this. In the past everything was written in my Journal. The return of the cancer in the brachial plexus means that writing is difficult. Almost impossible actually.

It was December that I saw Judy Hickey the Physiotherapist at the Mater Hospital. She suggested that I could have chronic, low grade cellulitis which would require a course of a particular antibiotic. She felt the situation was quite urgent. Rather than wait to see my regular GP, she thought it prudent to see Dr Gupta [Radiation Oncologist] as he was somewhere around the hospital. Dr Gupta was busy, consequently I was seen by his Registrar who prescribed a course of Dicloxacillin. It came with a list of possible side effects. I was not surprised to find myself suffering from gut problems.

Spoke to my GP about the side effects. He changed the antibiotics as there were still symptoms of cellulitis. End of story...

Or so I thought!

Until today. I began to put pieces of the puzzle together.

I realised it was about the same time that the pain returned with a vengeance. I referred to it as acute. My thoughts now are that it was about that time that I stopped absorbing the Oxycontin. I increased my dosage from 20mg morning and night to 50mg three times a day. That was when we began to suspect something sinister hence, the current testing.

I once again phoned Shann as I began to think that, if I was right, 50mg patches would be far too strong. After all, maybe it was simply that the 20mg was not being absorbed, rather than a more serious problem.

Shann appeared not to understand my concerns and suggested I simply see my GP as soon as possible.

I changed GP's when my GP of 13 years standing told me that this cancer is going to kill me. I decided that I did not want to be treated by a practitioner that had given up HOPE, even if there was a chance that I had lost HOPE.

I felt I was on to something and phoned my daughter Megan to tell her that there was a huge ray of sunshine appearing on the horizon. Just a little chuffed that I had worked things out myself I was shocked when she said 'Mum, don't you remember what happened to me?'

Megs was given the same antibiotic and ended up in hospital. Seems like a check of the stool will determine if I require another course of antibiotics to fix the problem. Left untreated this condition can have dire consequences as nothing is absorbed [including the Oxycontin] Ouch!

In the meantime, I will have to discuss the problems with the Pharmacist when I go to pick up the prescription for the patches. Maybe I still require only 20mg of Oxycontin night and morning.

My rule is not to worry about how long I live, but to focus on how I live.

I intend to stay alive.. no overdose of Oxycontin for me.

OMG Chez..wow so glad u are staying on top of things as best as you can..Know it has all been alot on you.I told you my dear friend you rock,you are the one to know your body and guess you are right that you have to keep you alive.Thanks that Meg could help you also.Chez it seems like it takes so long for you to get answer but they are there. Many Many gentle Hugs and lots of love come frome miles across to my dear special friend..
Love You.Kaz.xoxo

Thanks Kaz. You are a magician! Just finished the Post

Chez after your email u had me so worried,had to keep coming and checking.Our Angels my friend.xo

Chez I am so glad that you are watching and listening to your body...If you don`t know one will....
You definitely don`t need a higher dosage and please don`t let anyone talk you into it especially on these tablets...I know what they do to you...Hubby was on them for years (over 10)...You see like your GP they had written MAtt off also saying he didn`t have long to live..The tumour will kill you...Little did they realise the will power of a person who did want to live..He proved them wrong, but in doing so he was addicted to the Oxy`s...He was on 12 x 80mg tablets daily...Now he has weaned himself off them with the help of a Specialist doctor and on Something else, reducing the intake of this medication each month...
So what i`m saying is don`t ever give up...You know what your body is telling you, you are listening to it well....And if you don`t like what one doctor says keep seeking someone who will listen...
Thinking of you always my friend and praying that in the near future you will have all the answers you seek..xxx

Oh thank you Mandy. I would love nothing more than to get off the Oxy. I cannot believe the amount hubby was taking and survived. thankfully, I hate it and have no problems reducing my intake. Matt is a champion! He could only have done what he did with your love and support my friend.
My current problem appears to have been caused from the Dicloxacillin but even the pharmacist refused to adknowledge the problem.
Next call - the doctor.
Love and gratitude my friend xo

Really unfortunate that your longtime doctor would take such a position...not very supportive to say the least! Even when HOPE and FAITH is all you seem to have, maybe at that juncture in your life, that is all you need. It's very clear you have always maintained these and it's also good to see how diligent you are at seeking answers.
Many hearts are united in praying for you Cheryl...

Oops!
Mandy, you may have to overlook the typing errors; more of them these days which makes for interesting reading.

Sean, your comments remind me just how much I miss the regular communication we enjoyed in the past.
Dr DeSouza's comment appeared out of character for him. At the time I simply did not have the energy to question him. I simply exited and used another door that opened to me.
I welcome the reminder that hearts are united in prayer,
Love and blessings

Good to see that you are able to detect what is going on in your body. Keep fihghting girl. Your angel flower is wonderful. Hopefully she will look after you.

Oh Chez. What a time for you. I will pray too.

Hi Cheryl,
Here you were today when I came to see if you wrote again...I see I am a few days late in getting here...I so love your attitude and how you listen for the signs of what is happening inside your body! Jeremy has a way of getting your attention and making you take a long hard look...even if it is in the toilet! lol....Unreal how the pills were just going through you whole!!! No wonder you are in such pain!
Now we have to pray that the patch works at a low dose and it solves this pain problem.
Have you still got the tests scheduled for this week? They were for Mon. and Tues. right? So hoping they turn out good and nothing else to have to deal with for you.
I love your new plant...ANGEL WINGS....Not only is it beautiful, but another sign that ANGELS are watching over you! You have chosen to LIVE your LIFE as best as you can...You, my friend are doing just that. My prayer is that your quality of life will be satisfactory for you or even better yet....excellent!!!
Big hugs sent your way and looking forward to your next post or your next email!
God's Blessings Always,
Di

Diane, I have learned that it does not always make me best friends with my doctors, but it does mean I stay alive which is what it is all about.
Glad to be back on these pages ..

Debby this has been a particularly tough week and yet I am still smiling.
Life is still good ..

Oh Diane so much has happened this past week. Patch was removed so I will do a Post on the details once the testing is through.
It is lovely to find you reading the entries as I Post.
You can never know the strength I gain from knowing that you, and others, are following my ramblings.
Thanks so much my friend.
My Angel Wings Lotus Flower does not last long when it blooms but it has great meaning and keeps budding up. It is just in a cheap plastic pot too. Love it.
Love and gratitude xo