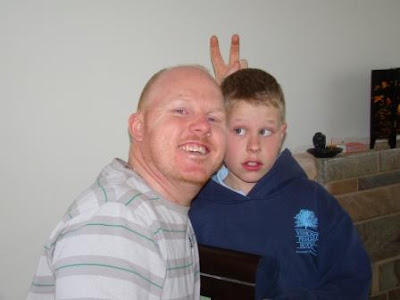 Damian and Jascha
As a family, our first opportunity to settle came when we purchased the Lakes Entrance Squash and Fitness Centre, Victoria in 1981.
Damian and Megan settled into St Brendan's School very quickly, loving the fact that they would not be expected to move again. We had always been on transfer status with Dad Ray working for International Harvester Company.
Damian very quickly made friends. Among his close personal friends, Geoff Bottom was a stand out.
In 1990 my late husband Ray was diagnosed with a brain tumour. Removal of the tumour left him paralysed down one side. At that time it was discovered that he also had a tumour in the lung.
Ray was no longer able to perform the duties that he loved so much at the Fitness Centre. The Centre was sold and we prepared for a move to Lake Macquarie as Ray wanted more than any thing else to spend precious moments with his elderly Mother. Knowing that he had limited time, this filled Ray's heart with immense pleasure, giving him a deep sense of peace and love. Pearl always referred to Ray as 'My Baby'
Ray, Damian, Jeremy and I made the move to Warners Bay. Megan chose to remain in Lakes Entrance giving her the opportunity to keep her horse and other animals.
After Ray's passing in 1994 we were a little lost. Geoff Bottom made contact with Damian and suggested that they move to Melbourne together. Geoff said later that it was a great move as Damian was an excellent cook and kept an immaculate house. He had been well trained!
The constant cleaning of the squash and fitness centre gave him good skills. The children well remember the hours spent sweeping floors, cleaning toilets and showers as well as the glass front door that patrons insisted on touching with their hands rather than using the door handles.
Living in Melbourne Damian met and married Amanda. Geoff, who was best man at the wedding met Melinda (Amanda's sister) as she was also part of the Bridal Party. They married shortly after. They made the move back to Lakes Entrance.
On Thursday evening there was a tragic motor vehicle accident in Lakes Entrance. Geoff's first born child JAY (Jascha's cousin) lost his life.
Geoff was in Melbourne, intending to catch up with Damian at the time of the accident. A very close family, Geoff's children were with their sister (Aunty Liz.) I understand all of the children were in the 4 wheel-drive vehicle at the time of the accident.
It is with a sad and heavy heart that we say goodbye to this precious little 10 year-old.
RIP
JAY BOTTOM
An Angel in the Book of Life
wrote down your babies birth.
Whispered as she closed the book
'Too Beautiful for Earth'

So very sorry readers; having trouble with formatting, particularly the spacing.
Any clues would be greatly appreciated.
Chez

Cheryl, so sorry to hear this, my heart goes out to Jay's family and all who loved him. I couldn't get through this without the tears rolling down my face, another child gone to soon. I always ask why. Sending lots of Love & Hugs.
Karen
XOXO

This is one of the hardest things in life...To understand why a child is taken from us at such a young age...I`m sure there are reasons and we will find out soon enough but it leaves family and friends with such a heavy heart....

As for the formatting Chez I am still learning the tricks of the trade here myself...If I work it out I will let you know...
Hugs to you and lovely to see you up and about....Don`t overdo it though...xxx

Oh that is so tragic! I am very saddened to hear this, and I send my prayers to the family and friends of this precious child! Rest in peace, dear child.
xoxoxo

Hi my friend...
It is with a very sad heart that I comment on this one... Just unreal, once again, a child too young to leave his family...has been taken away from this earth...another family to face the torment of losing their child...

May God reach down and send his angels to surround them and comfort them... on this ever so long journey of grief... they have to walk through ...

Not another child taken home.... my heat goes out to you, to your son, and to the Bottom family and all who will sadly miss this little boy. The hardest thing is to be left behind, there need be no concerns for Jay he is in the most wonderful place, where love will heal him and lift him up.

that should read my 'heart' goes out to you!

I am so sorry to read such sad news we can never understand why someone young and innocent is taken away..... May He Rest In Eternal Peace

Karen, it is unfortunate that we know, first hand, the battle that lies ahead and the difficulty of coming to terms with this tragedy. Geoff is an amazing father! These children were left in his care many years ago when Melinda 'took off'
Jay will have the love and comfort of our beautiful angels xo

Oh Mandy, it does seem hard more and more we are left to pick up the pieces after such a tragedy. Being parents gives us understanding and awareness showing us how difficult the path ahead will be for Geoff and the siblings.
Ah! The formatting. Fran did help me way back so I suspect I will have to go back to old Comments to find out what I need to do in the settings.
Thinking of you

Audrey thank you for caring. I believe in the power of prayer and know that when two or more people gather to pray miracles occur.
Many blessings and much love going to you xo

Diane, I feel that our angels will welcome Jay bringing peace and love for this new little angel.
We know the pain the family will endure as they endeavour to come to terms with this tragic loss.
Thankfully, I believe Geoff will have much support in Lakes Entrance. The family have helped so many over the years and it is now time for Geoff to be on the receiving end of the help that will be forthcoming.
God Bless Jay and his precious family xo

Starry, I know that you are right, and yet the the most difficult thing to come to terms with is the knowledge that they could actually be in a better place, and loving it.
Difficult days ahead and I pray that faith and friends will get them through the darkest hours.
Hoping your days are filled with the love of special friends

Thank you Alli and welcome.

I think back on all of my years and do not recall tragedy such as we live with today. So many changes; or so it seems!

life can be so cruel yet so beautiful too, Children are the biggest heartbreak to lose, so sad but that was a lovely memorial

Shazam, for me life has taken on new meaning since Jeremy's accident.
I pray that the family will feel the outpouring of love and support from the people of the township.
My heart goes out to them as I remember Jay. Rest in Eternal Love Jay..

Chez,
My heart goes out to Jay's family, so young too beautiful for this world, may they find comfort with the many memories they have of his short live... forever young..RIP.

Oh Bevally I cannot believe this. Two comments have both disappeared. Hope this is not BigBlog all over again.
Great to see you here.
We both know the pain and suffering associated with the loss of a child. It will be a hard road for them.

How sad. A young life lost. My sympathy to all involved.

Thank you Diane. I pray that friends will provide strength and comfort in their hour of need.

Oh my! Such a very young age to go. My heart goes out to this family.