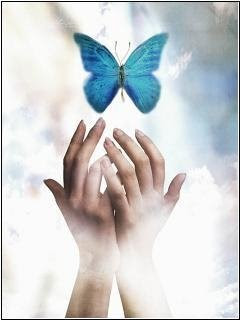 The above picture is one that Ness sent to me shortly after Jeremy's accident and I feel it is perfect for this Post.

In my haste to do my Post last night I completely omitted to give you news on Ness. I am sure our angels will protect me as I type, knowing that my previous Post stated emphatically that I was banned from the computer for one week.
Ness arrived home Tuesday. She sounded bright and cheery. As mentioned in a previous Post she underwent a Sentinel Node Biopsy prior to surgery. After surgery her sister Bec had mentioned there was something in the sternum.
Ness explained to me that the Sentinel Node Biopsy drained to the breastbone, rather than the axillary lymph nodes. The doctor said he had never seen this before and Medical Journal articles indicate that it is very rare. He knew therefore, at the time of surgery, that he would need to remove lymph nodes in the breastbone. He went very deep which resulted in soreness and pain. Had it not been for the result of the Sentinel Node Biopsy, he would not have looked for cancer spread in that area.
Ness said she felt the presence of her very powerful Guardian Angel and felt eternally grateful to Jezz for his presence. She therefore smiled when the doctor made the comment that, in his opinion, she must have angels by her side.
Once again, I am reminded of the book written by Wayne Dyer 'You'll See it When You Believe it'

Oh Cheryl,
I have goosebumps running up and down my body.... There are truly Angels who walk among us!!!! Your Jeremy being one of the 100,000 Angels...and mighty and tender is he...
What a blessing to all who read this and maybe...just maybe... "we all will "SEE it when we BELIEVE" it!...

So very happy to hear of Ness's cheerful voice and to hear she is home! I am sure she will heal to wholeness once again...and the healing which already took place in her heart! Even the doctor knew there was an Angel by her side!! Thank you sweet Jeremy...

Love you to the Heavens Cheryl,
Diane
xox

Hi Cheryl,
This brought tears to my eyes for the doctor to say what we believe in, Jeremy will be there for you both. So glad to hear Ness is doing good and will only good better...Love you!
karen
xoxo

Wow...I believe some doctors are given guidance from above when it comes to things such as this...
Your friend is truly blessed ....

And you young lady take good care of yourself....xxx

This is SUCH a wonderful story! Thank you for sharing and please, give Ness the biggest of hugs once she is up to receiving them! I am an ardent believer in Angels and the power they have! Ness is fortunate to have Jeremy walking with her on her journey.
- audrey
xoxoxo

Ah tears!..I don't know of these people but I happy to hear people having their health returned its a long slow heartbreak when someone you love is unwell but when they feel good its like you see the sun again! take care Chez

I hope she continues to improve.Well done doctor and angels.

Just dropping by Chez to send you a big hug.....xxx