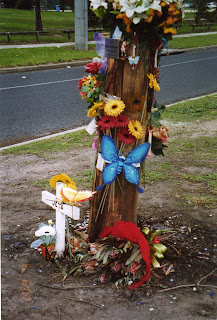 I found yesterday to be emotionally draining.
I left home at 7am to arrive at Garden City by 8.30am ready for my one and only day of Christmas shopping. Things were going well! I was in the process of purchasing a new white skirt to wear on Christmas Day.

It was 11am when I answered my cell phone. I found myself holding my breath as the voice at the other end said he was Constable ? from Bairnsdale Police. Memories of a phone call with Bairnsdale Police was on Tuesday 21 November 2006 came flooding back. I received a call from my eldest son Damian at 10.06pm informing me that my youngest, and much loved, son Jeremy had been killed in a single vehicle collision in McKean Street. How did Damian, in Melbourne, learn so quickly of the accident that happend 350km away? As Jeremy's only surviving parent it was up to me to make the phone call to the Bairnsdale Police for confirmation.
Yesterday the young constable very quickly explained that the Bairnsdale Council wished to speak to me regarding the tree that had been hit by the vehicle Jezz was driving. It is now dead and considered to be a potential hazard.
I was given a mobile number for Tim East, and a request to call him.
The Christmas spirit dissipated very quickly. I headed back to the factory to make the call.
I found Tim to be a delightful human being. He advised that there had been several complaints about the tree becoming a roadside memorial and he had successfully placated those making the complaints. He also added that he could not understand some people's motives, and that, maybe it had something to do with the fact that they had not walked in my shoes.

The Council apparently have heart (collectively) and wish to confer with me before any decision is made. They currently have no Policy on Roadside Memorials. I felt a deep sense of gratititude that the matter was being handled with such sensitivity.
Tim explained that branches were now beginning to break off and it was becoming dangerous. I could hear Jeremy's voice in my head telling me it was time! Was that time to move on or time to cut down the tree? Tim and I shed a few tears as I thanked him from the bottom of my heart for being so caring and considerate of my thoughts and feelings. I explained how grateful I was and wished him well. I then made a very tearful phone call to my daughter Megan in Lakes Entrance and asked her if she would be able to gather the plaque and personol keepsakes from the tree before it is taken down next week.
I have always thought that 'timing is everything.' Why then am I so accepting of the fact that the tree will be removed just one week prior to Christmas?
Perhaps Jeremy is saying 'Merry Christmas Mum!' Time to move on..

Oh Cheryl, this blog today ... of the phone call..the memories flooding back...(we had such a phone call from our oldest son about the death of our youngest son while walking the beach in another state at my husbands Vietnam reunion)

So I can relate to the gut wrenching feelings that flood your body.That moment will never leave us...still when thinking of it I cry and feel paralized. A nightmare which never ceases to end.

The beauty of this writing today Cheryl,is the voice of Jezz saying to your heart..."It is time to move on Mum"... another baby step to walk up that endless ladder of rungs... but each small step helps to go forward...to release that beautiful spirit...to set him free as the butterfly leaves your hand...

God love you, keep you strong, heal your broken heart, and mend your aching painful body. You are in my heart and in my prayers.

Your friend from USA,
Diane Rodgers

Oh Chez, what can I say to that? Obviously Jezz thinks it will be good for you to accept this and perhaps he feels better honoured by his living garden than by this poor, dying tree. Perhaps he doesn't want to see someone else hit the same tree? I do not know, but I commend you for getting through the conversation and coming to the conclusion you have, I am filled with love and respect for you. You really are wonderful, I am so lucky to be getting to know you. Love Starry

Sweet Diane. Had I not been drawn to do this Post I would not have had the opportunity to learn how similar our experiences were.
I understand exactly what you mean when you talk about the
gut wrenching' feelings.
How could Damian who was 350km away be the one to ring me? Damian works in the funeral industry and he knew how to tell his Mum of the tragedy.
Your parcel left today and I know our angels will seee it safely into your hands.
My loving thanks and blessings going to you..

Starry, the past couple of days have seen me missing you at every turn. I have not been back onto BigBlog; not really sure why except to say that I simply run out of time each day.
Thank you for your beautiful words and empathy. I love the sensitivity and caring side of your nature and feel privileged to have you sharing the journey.
Love Chez

You are very brave to be able to reach the decision to let the tree go. It might be a sign that you are slowly healing.
I'm sure Jez would prefer the memorial garden than the tree that got in his way.

Diane, I know you are right about the tree. It is just a tree and we do have a beautiful garden in memory of our favourite boy.

I am still finding my way around here but not having a lot of time to fiddle at the moment.

Did I manage to fix that other problem you mentioned?

Golly it is so long since I was here I've forgotten the problem was it something to do with commenting? Anyway I can comment today.

I am going to respond here in the hope that you come back.
I have put out calls for help as I am having trouble with my Posts.
My Draft becomes just lines when I Publish and it is give me the #####
Could it mean I go back to BigPond? I certainly hope not...
I see that you have no problems with loading lots of pics and yet I do as each new one goes to the top and that is not what I want.
Any ideas? Chez

Morning Chez....
I`m not to sure about your Drafts as I`ve never used it....With photos once you up load them onto your post then you click on the photo and drag it onto your post where it want it to be placed....
I`m sorry i`m not much help here as i`m still learning this site myself....If you go see Diane (Adventure before Dementia) she is a wizz at this site...She will be more than willing to give you a hand....

I need help!!!
I am unable able to leave a comment on your BigPond. When I go to login it simply comes back to the same spot. I have no idea what the problem is. Cannot get onto Jo-Anne's site.
Now I am unable able to work this out. Did ask Diane however I found that here Comment is set up a little differently to mine and it did not go through. I will have to try again now.
Could you please light a candle at 7pm tonight in memory of all of those who have gone before us?
Love and thanks Chez

Oops! Sorry Mandy LOL
That sounds a little like I feel. STRESSED!!
It is showing...
Have a great day..

Hi Cheryl,
Just found your site.
Will be lighting the candles tonight for the children.
Love rainbows, hugs and butterflies
Jo-causeway
joanne

Chez bigpond has a mind of it`s own...lol

I only got you message about the lighting of a candle but as it happens to be I always have a candle lit of an evening so it worked out well....

When you do load the pictures they do go to the top....It`s normal so down`t worry....Once you have written out your post and know where you would like to place your pictures that`s when you click on the appropriate photo and then drag it to the location on your post....

I hope this makes sense to you....It`s all trial and error but you will get there....

And no you didn`t sound stressed...lol...

Crikey, Mandy calls me a whizz at this but I'm not I'm still working out stuff.
I saw on the dashboard in buzz about the new way to comment so i clicked it and you are supposed to be able to comment without leaving the blog page, so that's why its different, but you should be able to comment from the drop down box, it should already be set at "Chez google". Hope it works next time for you. Mandy's is the same and your comments get there OK, so I don't know why it wont work on mine. Ialso don't know why i don't have the link saying, "Leave a comment" it just says "Comments" That's something I have to work on.
Bill says you may not be able to see the text because of the colour, you might accidentally have it on white. If you highlight the lines the writing should show up. If it does try changing the text colour.
Golly I hope this is helpful, please stay here . I spent a fair while reading the buzz pages and help pages to try to learn stuff. It is a slow process.
Another way to move pictures around is to click the HTML tab and highlight the funny language for the photo and cut and paste it where you want it.
What i do is work out my story with the pics and then I upload the pics from the last one first and the first one last (that makes sense??) Then I compose the story in between the pics. This is just my way, everyone seems to find what suits them, keep trying , keep asking others.